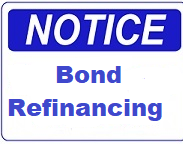 NOTICE HEREBY IS GIVEN that at a public meeting held on October 12, 2020, at 7:00 p.m., prevailing time, the Board of Commissioners of the Township of Lower Allen, Cumberland County, Pennsylvania (the “Township”), enacted an Ordinance (the “Ordinance”) authorizing the Township to incur nonelectoral debt by the issuance of the Township’s (i) General Obligation Note, Series A of 2020 (the “Series A Note”) in the principal amount of $4,773,000 and (ii) General Obligation Note, Series B of 2020 (Federally Taxable) (the “Series B Note,” and together with the Series A Note, the “Notes”) in the principal amount of $1,859,000.  The Notes were issued to fund the Project, as such term is defined in the Ordinance.

The following amendments were made during final enactment of the Ordinance: (i) language regarding the prepayment provisions of the Notes found in Section 10 was revised; (ii) language in Section 12 regarding the useful lives of the projects being refinanced was revised; (iii) language regarding the escrow fund and the investment of the funds therein was updated; (iv) Exhibits A and B relating to the maximum annual debt service schedules, and Exhibits C and D relating to the forms of the Notes were finalized in accordance with the final terms of the purchaser proposals; and (v) certain clarifications and grammatical changes were made to the text of the Ordinance.

The text of the Ordinance as finally enacted, may be examined or inspected by any citizen in the office of the Township Secretary, at the Township’s Municipal Services Center, 2233 Gettysburg Road, Camp Hill, Pennsylvania, on any regular business day between the hours of 8:00 a.m. and 4:00 p.m., prevailing time.

This notice is given in accordance with the requirements of and in compliance with the Local Government Unit Debt Act, 53 Pa.C.S. § 8001 et seq., as amended and supplemented.