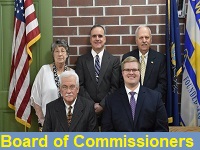 President Villone called the October 25, 2021 Regular Meeting of the Board of Commissioners to order at 7:01 PM. He announced that Proof of Publication for this meeting was available for review. This was followed by a prayer and the Pledge of Allegiance.

Commissioner SCHIN moved to approve the minutes from the October 11, 2021 Regular Meeting. Commissioner KUTZ seconded the motion. The motion carried 5-0.

John Minito, representing the West Shore Recreation Commission, came to the podium. Mr. Minito stated that the Commission is in its 54th year, and currently includes four staff members and 100 instructors supporting 6 area municipalities. He expressed regret that the pandemic restrictions over the past year did not allow them to reach their registration revenue goals, and therefore per capita numbers warranted an increase from $2.50 to $3.00 (the first increase in 8 years). Additionally, the Commission reduced technical support, cut back on coverage for the staffers, and liabilities, and pushed replacement of computers and a needed upgrade to their servers out to 2022. Mr. Minito added that registration numbers are now starting to increase. He thanked Vice President Black and Beth Ann McCoy for attending their West Shore Rec meetings, and for all the support offered by Lower Allen Township.

Scott Ryno, a consultant representing Keystone Community Medical Services came to the podium. He was joined by Jesse Suders, a Data Management employee of Dawood Engineering.

Mr. Ryno explained that Fire/EMS Stations 1, 2, and 24 were the focal point of his assessment.  The scope of the study included the review of station location and response time using historical dispatch statistics, potential upgrades to the station’s facilities, and potential need for apparatus additions and/or replacements.

The overall conclusion (taken directly from the study):

Commissioner Kutz asked if the study considered the hundreds of new homes not yet built in the Arcona development, as this construction may require an increased need for emergency services. He added that there has been past discussion on moving Station 24 to the Arcona community and asked if Mr. Ryno’s consulting firm would provide a supplemental drive-time study that would outline what a move to Rossmoyne Road on the east side of the railroad tracks would look like. Mr. Ryno agreed.

President Villone inquired with Director Holl on the next steps. Director Holl indicated that the BOC has already reviewed Public Safety’s presentation for Station 2 in terms of the facility.  He said the 2022 budget includes funds to improve facilities there, in addition to some seed money to be applied towards a feasibility Phase 1 study.  He added that a staffing study and an apparatus study may be on the horizon for 2023, and that a long-term strategy will come from that night’s presentation.

President Villone advised the audience that if there were any items on that evening’s agenda that they wish to comment on, to please indicate as such. There were none.

President Villone noted that if anyone wished to speak at that time, there would be 15 minutes allotted per person to speak at the podium.

Donna Krevlin of 1419 Wolford Way came to the podium. She indicated that she moved to Lower Allen Township in January of 2021 at which time she was told by her Charter salesman that the streets would receive the final paving after the last townhouse was sold, which was on June 15, 2021. Rutted, rough, and bumpy streets are causing flat tires, vehicle damage, pedestrians are falling in these streets as there are no sidewalks, and when it rains, there is ponding on the roads. Ms. Krevlin asked that the streets be finished prior to winter.

Kelly Logan of 3212 Emerson Way came to the podium. She shared pictures of the condition of the streets in her neighborhood. She added that some people are struggling selling their homes due to the road conditions, that Charter has missed deadlines in the past, and there is concern another winter will go by and the work will not be done. She asked that the BOC hold Charter accountable to complete the work.

Connie Kindler of 3209 Emerson Way came to the podium. She asked that before paving is done, BOC will require Charter repair the base course.

Alana Berger of 3202 Schultz Place came to the podium. She stated she has lived in Arcona for 2 and a half years, moving from a Keystone development in Marietta, PA. Here she experienced a similar ordeal, to the point where garbage trucks would refuse to drive on the routes and trash was not collected.

President Villone asked Mr. Vernau or Ms. Davis to weigh in from a Township viewpoint. Ms. Davis stated that Charter Homes came to the Township in August and received a reduction and extension of their financial security. Inspections were done and the new security was posted and extended until August 9, 2022. The outstanding improvements itemized that were reviewed and approved by the Township Engineer included wearing course on streets (about 3,000 sq. yards), wearing course on alleys, some trails, stormwater pipe flushing, and E&S maintenance. Mr. Vernau weighed in. He indicated the streets are private, therefore the Township has no authority to influence Charter’s timeline on improvements. He added that there have been several recent email communications between Charter and the Township, and that Anthony from Charter has stated repeatedly that the paving will be completed in 2021, more specifically no later than the second week in November. He then reiterated that until the streets are dedicated, the Township standards do not apply.  Hypothetically, if the paving is not completed by August 2022, the Township could call the security and have it done, drawing from the security.

Stuart Krevlin from 1419 Wolford Way came to the podium and asked why the extension was granted. Mr. Eby offered explanation. He stated that when financial security to guarantee public improvements is coming due, the Township Engineer, as a standard practice, will complete inspections and then report the improvements that need completed to the Board, who will then grant the time extension, with a 10% increase of the existing security.

Blaze Lifich of 3202 Shultz Place came to the podium and stated that his wife Alana previously mentioned their experiences living in a different neighborhood that also endured the road paving issue. He said that they lived there for 9 years, and the road never got paved.  He added that snow removal was not effective, and snowplows were damaged.

Noting that Charter’s latest update was that the work would be completed by mid-November, President Villone asked the Township staff to be diligent in their communications with Charter leading up to the November 8th BOC meeting, and to keep the BOC members updated with anything noteworthy.

President Villone stated that any Commissioner, staff member, or anyone in attendance who would like to have an item on the Consent Agenda removed for further discussion, he could do so at that time.

President Villone stated he would not be looking for a motion to enact Ordinance 2021-05, amendments to Section 220-206 and 220-207, Wireless Communications Facilities, of the Codified Ordinances of Lower Allen Township. He stated that the public hearing held that evening prior to the Regular meeting of the Board of Commissioners had prompted the need for staff to complete further research.  Mr. Vernau stated staff would need direction from the Board on the five recommendations that came from the hearing. President Villone recommended offline discussion before the next BOC meeting on November 8th so that staff can prepare to address the topic during the next BOC meeting.

Commissioner KUTZ moved to authorize LAT staff to make substantive changes to Ordinance 2021-05 consistent with the five recommendations of Lower Allen Township Planning Commission outlined in the document received that evening, prepared by John Eby for October 25, 2021, in addition to authorizing the addressing of concerns that Vice President Black voiced during the public hearing earlier in the evening. Vice President BLACK seconded. The motion carried 5-0.

For the Streetlight fund, Mr. Grove stated the fund is in good shape, and he does not expect an assessment increase for the next few years, at least through 2024.

For Sanitation, Mr. Grove stated that due to a recent contract renegotiation, the rate will move from $72.96 to $76.10 per quarter. He stated bank fees were added to the ledger to accommodate fund accounting provided by an investment pool.

For Highway Aid, Mr. Grove stated this is money provided by the State. The street repaving program money is funded every other year.

For Debt Services, Mr. Grove said this covers payment of bonds and capital leases. He stated the new bond expires in 2025.

For Capital Improvement Fund, he said there is no new projects coming out of this fund for next year.

President Villone asked Mr. Grove to pull together a spreadsheet like one he has offered in the past forecasting fund balances, long term, where the Township would stand financially over the next few years. Mr. Grove agreed he would offer the information prior to the end of the year.

Mr. Vernau stated the November 8th BOC agenda will request a motion to place the budget on the table. The Board came to a consensus that there is no need for the additional scheduled budget meeting.

Mr. Eby said Lower Allen Township was commended for its part in the recent PENNBOC conference in Reading.

Mr. Vernau said that Kirk Stoner set up a meeting with PennDOT regarding the tolling of the I-83 bridge for November 15th at 6 PM at the PennDOT maintenance facility in Carlisle (40 Army Heritage Drive), for anyone that wishes to attend the meeting.

Commissioner Holtzman asked that lights be placed on Rossmoyne Road by the school. Director Holl indicated that the Manager drafted a letter to PennDOT on the topic, and Director Holl has met with Brett Sanders from the school district, and the school district’s architecture engineering firm. They are reviewing options for crosswalk and bus crossing signs. He noted it is a state road, therefore a traffic study may be a requirement.  They are working together to negotiate a solution and that conversation is ongoing.

The regular meeting of the Board of Commissioners adjourned at 9:35PM. The Board moved to Executive Session to discuss a hotel tax assessment appeal and expiring board & commission terms.