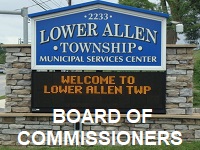 President Villone called the February 14, 2022 Regular Meeting of the Board of Commissioners to order at 6:00 PM. He announced that Proof of Publication for this meeting was available for review. This was followed by a prayer and the Pledge of Allegiance.  Commissioner Holtzman was absent with excuse.

President Villone advised the audience that if there were any item on that evening’s agenda that they wish to comment on, to please indicate as such. Seth Barry from Solar Renewable Energy, LLC, indicated his intent to comment on Agenda Item 11 A – Solar Energy Final Proposal for Township Property.

President Villone stated that any Commissioner, staff member, or anyone in attendance who would like to have an item on the Consent Agenda removed for further discussion, he could do so at that time. There were none.

Items on the Consent Agenda:

e.  Amend the Minutes of the December 13, 2021 Public Meeting to reflect that Commissioner Kutz moved to enact Ordinance 2021-06, 2022 General Fund and Other Funds Budgets.

President Villone requested a motion to enact ORDINANCE 2022-01, amending the official map of Lower Allen Township by vacating a portion of public right-of-way known as U.S. Route 15 South Slip Ramp acquired from the Pennsylvania Department of Transportation and a Township Road known as Bon-Ton Drive to the Lower Allen Township Development Authority. Commissioner KUTZ made the motion. The Secretary called the roll:

President Villone requested a motion to approve the purchase of replacement police patrol and unmarked vehicles. He referred to the detailed report included in the board packet.

President Villone noted that if anyone wished to speak at that time, there would be 15 minutes allotted per person to speak at the podium. There was none.

Ms. Davis presented the issue for discussion and possible action, to authorize staff to prepare and solicit bids for landscaping and maintenance services for three bioretention basins, rain gardens at the Municipal Services Center (MSC) and Cedar Run Park, and landscaping beds at MSC. Vice President Black asked how soon the plans would be prepared for bidding. Ms. Davis replied that the specifications were ready, and bids could be out next week. President Villone noted that the cost of maintenance is funded through the stormwater fees. Ms. Davis affirmed that the stormwater budget was in good shape.

Commissioner KUTZ moved to authorize staff to prepare and solicit bids for the landscaping and maintenance services as presented. Vice President BLACK seconded. The motion carried 4-0.

Ms. Davis explained the recent reorganization of positions within the department, leading to the creation of a new position for the Maintenance Operations Supervisor, formerly known as Highway Superintendent.
Commissioner KUTZ moved to approve the job description for the Maintenance Operations Supervisor. Vice President BLACK seconded the motion. The motion carried 4-0.

Ms. Trone presented the information for Resolution 2022-R-10, Plan Revision for New Land Development for DEP on the Lark Meadows Sewage Facilities Planning Module. She noted that typically, there is an exemption from the full module, however the Sewer Authority has taken this step in recent years due to weather conditions and DEP’s request for a more in-depth study. The Township was required to be an applicant for the plan to move forward. She referenced the sewer planning module included in the Board meeting packet.

Ms. Trone explained that due to an anticipated retirement, the Township will need to restructure the department and to hire someone with codes writing and enforcement experience. Staff is seeking Board approval of the proposed job description and to advertise for the position.

Commissioner KUTZ moved to approve the job description and to advertise for a Zoning and Codes Administrator. Commissioner NAGY seconded. The motion carried 4-0.

Mr. Holl reported that the Department had been the recipient of the Innovative Strategies to Combat Crime Award and granted funds in the amount of $59,504 from the Pennsylvania Commission on Crime and Delinquency to expand the current camera and license plate reader system. The expanded system will provide full coverage of the commercial district to address criminal perpetrators. The Department is seeking permission to purchase the equipment and set up the sites. President Villone inquired abut ongoing maintenance. Director Holl explained that maintenance is contracted with the vendor and contained within the current budget. He added that being a host of the project server, several other police departments will participate and pay a portion of the maintenance fee.

Mr. Vernau presented the agenda item for presentation and discussion. He noted that he and Mr. Rick Grove have been meeting with Mr. Seth Barry from Solar Renewable Energy, LLC to consider options for a solar project within the Township.

Mr. Barry presented details of the proposal to the Board. In addition to providing background information about the company, he presented several examples of similar projects done locally. The proposed project would include two sites. The first would be a ground-mounted solar panel array located on the property across from the St. John’s Road Public Works building. The second site would include a smaller array installed atop a parking canopy as well as ground mount on the north side of the municipal building. Mr. Barry presented specific terms of the proposed agreement and purchase, related federal tax credits, energy, and cost savings.

The project proposal projects the solar arrays to allow an offset of 95% of energy consumption through net metering. He also explained the details of a Solar Power Service Agreement to provide for the financing of the system. The project anticipates an energy savings of $55,000 per year and $2.5 million in savings over the 40-year lifespan of the solar array.

Commissioner Nagy asked Mr. Vernau if any other proposals were considered. Mr. Vernau noted that staff had not talked with other companies regarding the proposed project, but he noted Solar Renewable Energy LLC had a strong local presence and positive record. Mr. Vernau expressed his support for the project and the cost savings related to solar energy. Mr. Barry addressed the trends in transition to renewable energy and the ongoing energy price increases. He added that the SRECs will continue to increase in value in the coming years.

Mr. Grove addressed the details of the financing structure for the project and expressed his support.

Commissioner Kutz expressed he would be more comfortable with more time for the opportunity to engage in further discussion with staff to address outstanding questions prior to making a final decision, and to revisit the issue at the next meeting. The other Commissioners agreed to contact staff with additional questions.

Approval of payment to Remco, Inc.

Mr. Vernau presented a request to approve payment in the amount of $38,280 to Remco, Inc. for work already performed on the MSC main breaker removal, installation, and old breaker re-manufacturing. The amount of the expense is over what is usually approved by staff and requires approval of the Board of Commissioners.

Commissioner KUTZ moved to approve payment to Remco, Inc. in the amount of $38,380. Commissioner NAGY seconded. The motion carried 4-0.

President Villone announced that following the Commissioners’ reports, the board members would recess to Executive Session for the purpose of discussing personnel issues.

Commissioner Nagy reported that he attended his first Sewer Authority meeting as the official liaison. The Sewer Authority is planning a study for four different areas in the Township that are not currently connected to public sewer. He also noted his recent attendance at an emergency management training and Fire Company meeting.

Commissioner Kutz welcomed Idea Coffee to the Shoppes at Arcona, noting his attendance at their recent grand opening event. He also noted his satisfaction with continued investment in technology in the Public Safety department, describing it as a great step forward in the right direction to making the community safer.

President Villone also expressed welcoming remarks for Idea Coffee. He reported on his recent attendance at a 4-Minute City program presentation. The 4-Minute City aims to increase survival rates of out-of-hospital cardiac arrest through data-driven widespread deployment of AEDs across the country, in areas where this life-saving technology is most needed.

Finally, he remarked on his recent participation in the Recreation and Parks Board meeting, noting the appointment of new Board member, Josie Dougherty.

President Villone thanked the staff for their hard work.

Commissioners recessed to Executive Session at 7:25 p.m. to discuss two issues: 1) Litigation against PennDOT RE: I-83 South Bridge Tolling Proposal, and 2) Resignation and permission to advertise.

Commissioner KUTZ moved to accept the resignation of Brian Harshbarger from the position of Public Works Coordinator. Vice President BLACK seconded the motion. The motion carried 4-0.